Italiaonline e 01 Distribution together for the launch of Soldado - Corporate

Italiaonline e 01 Distribution together for the launch of Soldado 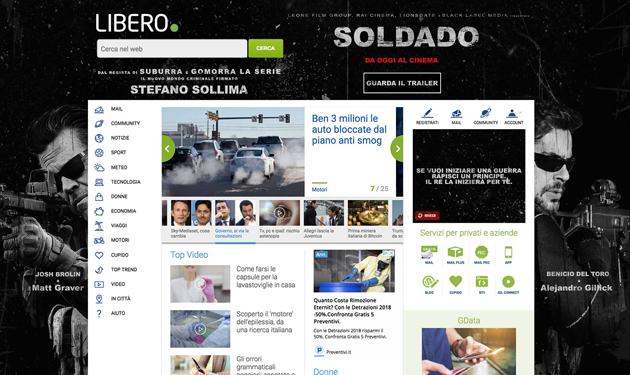 On October 18, for the release in the cinemas of Soldado, the new film directed by Stefano Sollima, director of Suburra and Gomorra la serie, starring Benicio Del Toro and Josh Brolin, 01 Distribution relies on Italiaonline for a high impact web campaign.

The creative idea arises from the collaboration between 01 Distribution, a directorate of Rai Cinema, which distributes the film in the movie theatres, and iOL Advertising, the Italiaonline digital ad agency, in collaboration with the technological partner Sizmek and planned by Media Insight media center.

The campaign for the launch of Soldado is declined on the home page of Libero.it, the portal of Italiaonline visited by millions of users every day, and Wetransfer.com, the online service for sending and sharing big files all around the world in a fast and easy way, which Italiaonline, with iOL Advertising, is the advertising agency for our country.

The result of the partnership between Italiaonline and 01 Distribution is a “tailor made” web communication product. Creativity is dynamic and with a strong emotional impact to bring back the charm of the big screen on the web, it is modeled on each of the home pages and visible from h 16 to h 24 of 18 October on Libero.it and throughout the day of 18 October on Wetransfer.com.On Libero.it a morphing turns the home page into the rifle that characterizes the Soldado poster, and then leads to the trailer. On the Wetransfer.com home page, there is an interactive wallpaper with 3 videos, each of which shows the story of a character. According to the video on which the user dwells, the background of the wallpaper changes, showing the character of the chosen video.

Massimo Crotti, Sales house director at Italiaonline, commented: “Our digital communication projects stand out because they are perfectly integrated with user experience, playing on the characteristics of the portals on which they are declined. So, they are original and exclusive designs, like this one we made for Soldado. We are proud that 01 Distribution has chosen us for a web campaign linked to an important and expected movie “.

(N.B. This is a translation of the Italian press release)