THE NEW ITALIAONLINE: A DIGITAL DOT IN MILAN STOCK EXCHANGE 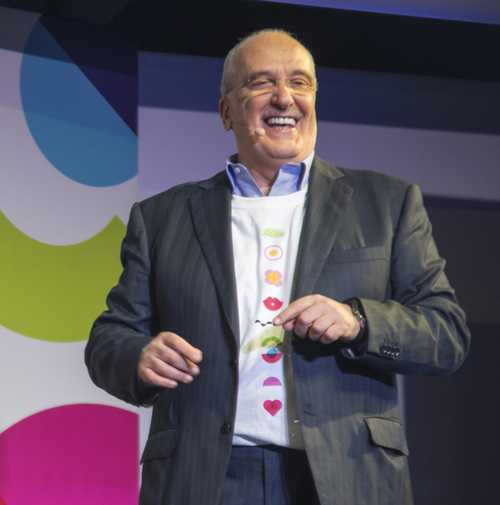 The new Italiaonline S.p.A., which arose from the merger between the first national internet company SEAT Pagine Gialle, has presented itself and its new brand during an event in Milan Stock Exchange on June 13th. The brand is a colorful digital dot, created by New York-based brand architect Amir Fayo. The complex job of rebranding the newly formed company, which was part of the final stage in the long process of M&A, was carried out with the help of Interbrand, a leading brand consultancy agency.

THE CONCEPT – the “Italian digital dot” is the result of research and analysis intended to identify the Italian DNA in the graphic language and typography used by renowned national designers (Vignelli, Grigniani, Munari, etc.), as well as in landscaping and in artistic, industrial, and cultural production in our country in order to isolate the primary cell, the nucleus, which has been graphically depicted by a dot. It is a dot that creates identification, meaning, and connection. This special point contains within itself the Italian DNA representing creativity, passion, and tradition. The Italian digital dot is the basis of the new language of our future.

EMOJIS – As a corollary to the brand, a set of emojis – 8 icons which graphically represent the values and sentiments that inspired the new brand – has been created to convey everything the that dot can express: tradition, experience, creativity, dynamism, connection, identity, global/local aspects, and passion. This is the first time that a new brand has been accompanied by a set of emoticons.

PRODUCT BRANDS – The historical brand Pagine Gialle (Yellow Pages) has become a product brand represented by a G-shaped pin point, a reference to the digitalization of the classic thumbtack which we are accustomed to using in the physical world to mark places on a map which are important to us. Such places are defined by the people and experiences that we have there. In light of this, “we have digitalized what is local and localized what is digital”. The brands PagineBianche and TuttoCittà also use pin points in the shape of B and T, respectively. The concept of the digital dot is also seen in the new Virgilio logo, in which the first ‘i’ is transformed into two dots.

The rebranding process is also accompanied by a campaign in the mainstream media, both online and offline, with various initiatives unfolding over the coming months.

“From the integration of SEAT Pagine Gialle and Italiaonline emerges a new Italian company whose mission is to serve as a guide for Small and Medium-Sized Companies, while also exploiting all of the possibilities which digitalization makes possible for their business”, explained Antonio Converti, CEO of Italiaonline and SEAT Pagine Gialle. “The new brand represents a mix of creativity, passion, and Italian excellence, combined with the know-how and experience of the two great companies that form the new Italiaonline. The rebranding process had us engaged for several months in search of the perfect representation of what we want to be, while staying true to our fundamental values such as innovation steeped in tradition and attention to customers first and foremost”.